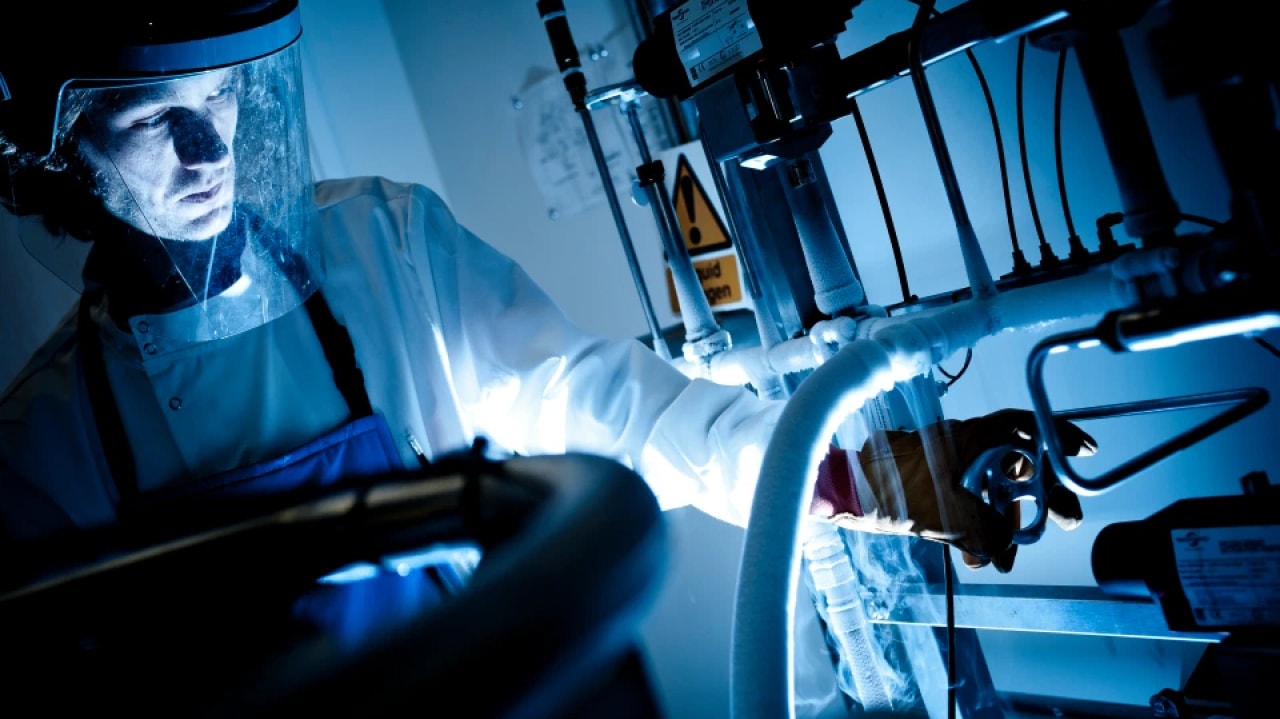 An oxygen deficiency monitor and alarm is used to alert staff before they enter an area that may have critically low oxygen levels caused by a pressurized gas leak. This is especially useful in applications like cryogenics, cryotherapy, or cryofreezing that use liquid nitrogen, liquid helium, liquid oxygen, or any cryogenic gases.

A convenient way to transport gas is to pressurize it into a tank or cylinder. Gas tanks and cylinders are used in many different industries. Restaurants use tanks of carbon dioxide to carbonate sodas. Flower shops use cylinders of compressed helium to fill balloons. Even your outdoor grill uses propane gas to cook your burgers and hot dogs.

Across all these different uses for different gases, the one thing that they all have in common is that when stored under pressure, the gas becomes a liquid. If that tank is opened or leaks in an enclosed area, the gas will expand and lower the oxygen level. An oxygen sensor in an oxygen deficiency monitor is the only way to detect low oxygen levels.

The same is true in applications like cryogenics, cryotherapy, or cryofreezing.

Cryogenics is the production and behavior of materials at very low temperatures. Scientists use gases like hydrogen or helium that become a liquid at or below -292°F (-180°C) to freeze materials and study the changes caused by freezing. Cryogenics research has led to the creation of MRI machines, liquid oxygen rockets and superconductors.

Cryotherapy or cryosurgery uses liquid carbon dioxide, argon or nitrous oxide for external surgical procedures such as glaucoma, retinal detachment repair, removal of warts or skin cancers. It works by freezing the cells. In addition to external surgery, it can be used to kill tumors in the liver, kidneys, bones, lungs and breasts.

Cryo freezing or cryopreservation is most often used to rapidly freeze food by exposing it to liquid nitrogen or liquid carbon dioxide. The speed of the freezing minimizes the change of state while the food is being frozen. Because of the minimal tissue damage during cryofreezing, it has also been used on deceased humans who believe someday science will be able to revive them.

The College of American Pathologists has recently enforced new requirements that identify the potential dangers related to using and storing solid CO2 (dry ice) as well as liquid nitrogen and other gases used in cryogenics.

These specifications apply to clinics, reproductive facilities and laboratories to monitor safety in regards to oxygen deprivation after an incident of inhaling liquid nitrogen during a rescue attempt occurred in 2017.

We use cookies on our website to give you the most relevant experience by remembering your preferences and repeat visits. By clicking “Accept”, you consent to the use of ALL the cookies.
Cookie settingsAccept
Manage consent

This website uses cookies to improve your experience while you navigate through the website. Out of these, the cookies that are categorized as necessary are stored on your browser as they are essential for the working of basic functionalities of the website. We also use third-party cookies that help us analyze and understand how you use this website. These cookies will be stored in your browser only with your consent. You also have the option to opt-out of these cookies. But opting out of some of these cookies may affect your browsing experience.
Necessary Always Enabled

Any cookies that may not be particularly necessary for the website to function and is used specifically to collect user personal data via analytics, ads, other embedded contents are termed as non-necessary cookies. It is mandatory to procure user consent prior to running these cookies on your website.

Shopping Cart
There are no products in the cart!
Continue Shopping
0